The Best Places to Take Instagram Photos in Toronto this Summer

Any local Torontonian would tell you that the city completely transforms in the summer. Toronto is home to its fair share of parks, cultural hubs, and beaches, all best explored when the warmer months come around.

Whether you live in the city or are just passing through, we’ve rounded up the most insta-worthy attractions Toronto has to offer. Plus, a few pro-tips for exploring the city like a true local. Get ready to whip out your phone cameras and strike a pose next to these picture-perfect photo backdrops 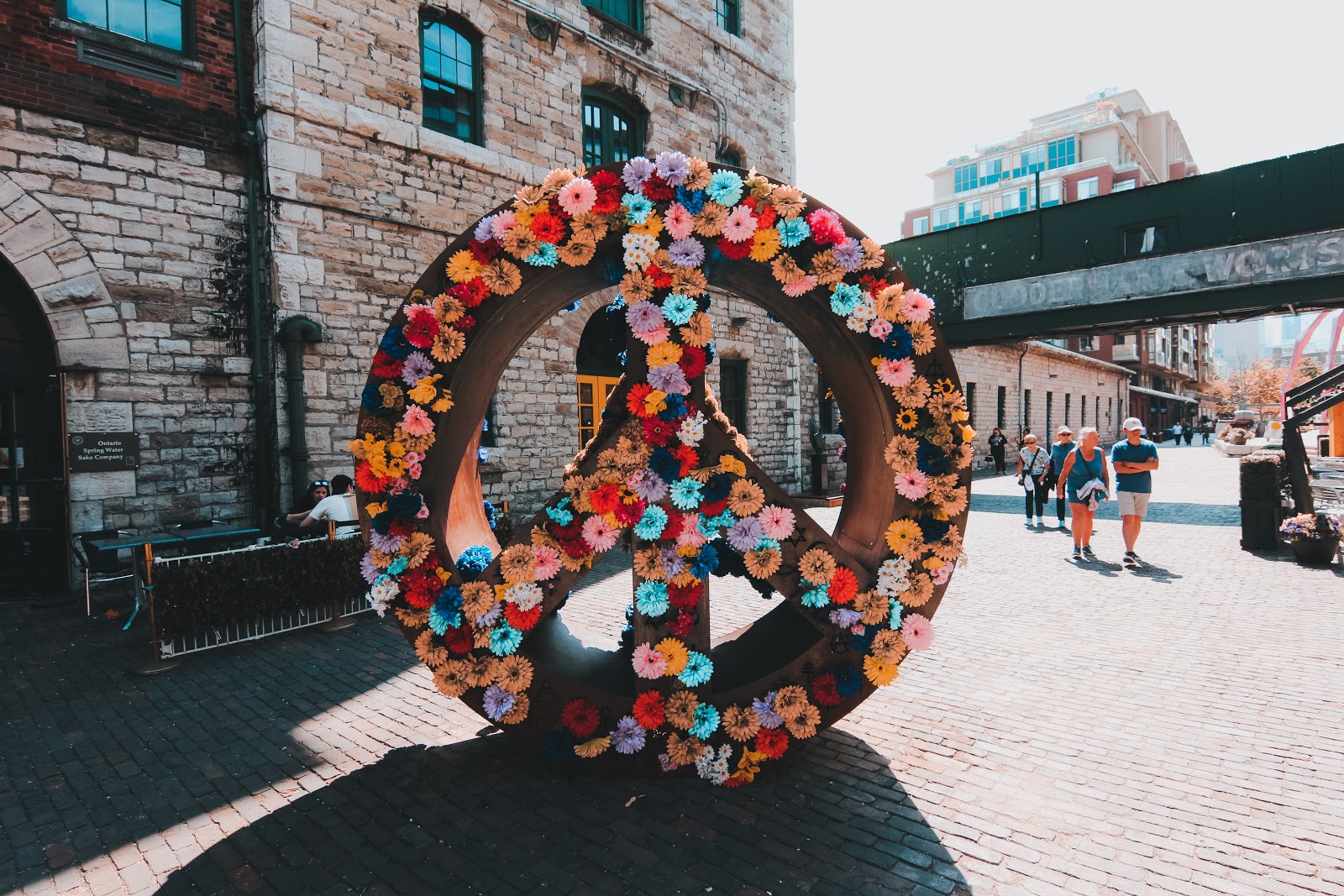 In the mid-1800s, this space was home to the largest whiskey distillery in the world. Today, the distillery district is a historic hotspot for culture-savvy tourists and locals alike. Its pedestrian-only cobblestone roads are lined with art galleries, cafés, and some of the best restaurants in the city. There are a handful of art installations and sculptures throughout the distillery district, so this neighborhood was made to be photographed. Don’t forget to bring a lock to take part in the famous love lock installation!

2. Museum of Illusions
Located in Old Toronto, the Museum of Illusions is the first of its kind in the city. Think of it as part fun house, part art gallery for contemporary optical illusions. The museum is fully interactive and has several installations that are intended to be photographed. Markings on the ground even indicate where visitors should stand to get the best shots! 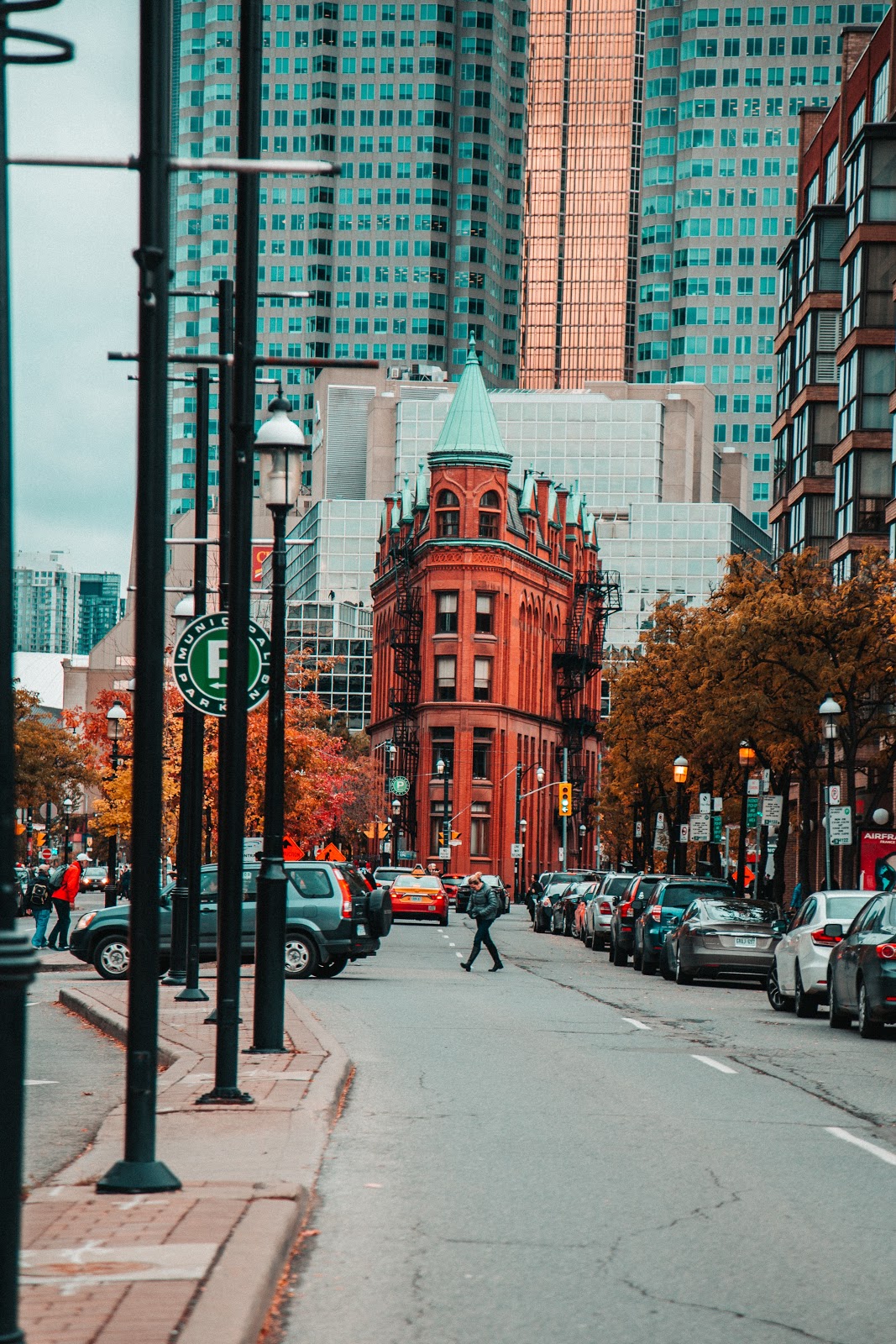 Also known as “Toronto’s flatiron building”, the Gooderham building is one of the defining architectural features of Old Toronto. Pro-tip: stand facing west on Front Street for one of the most iconic views in the city. You’ll see a mix of old and new as the Financial District’s skyscrapers tower in the background. 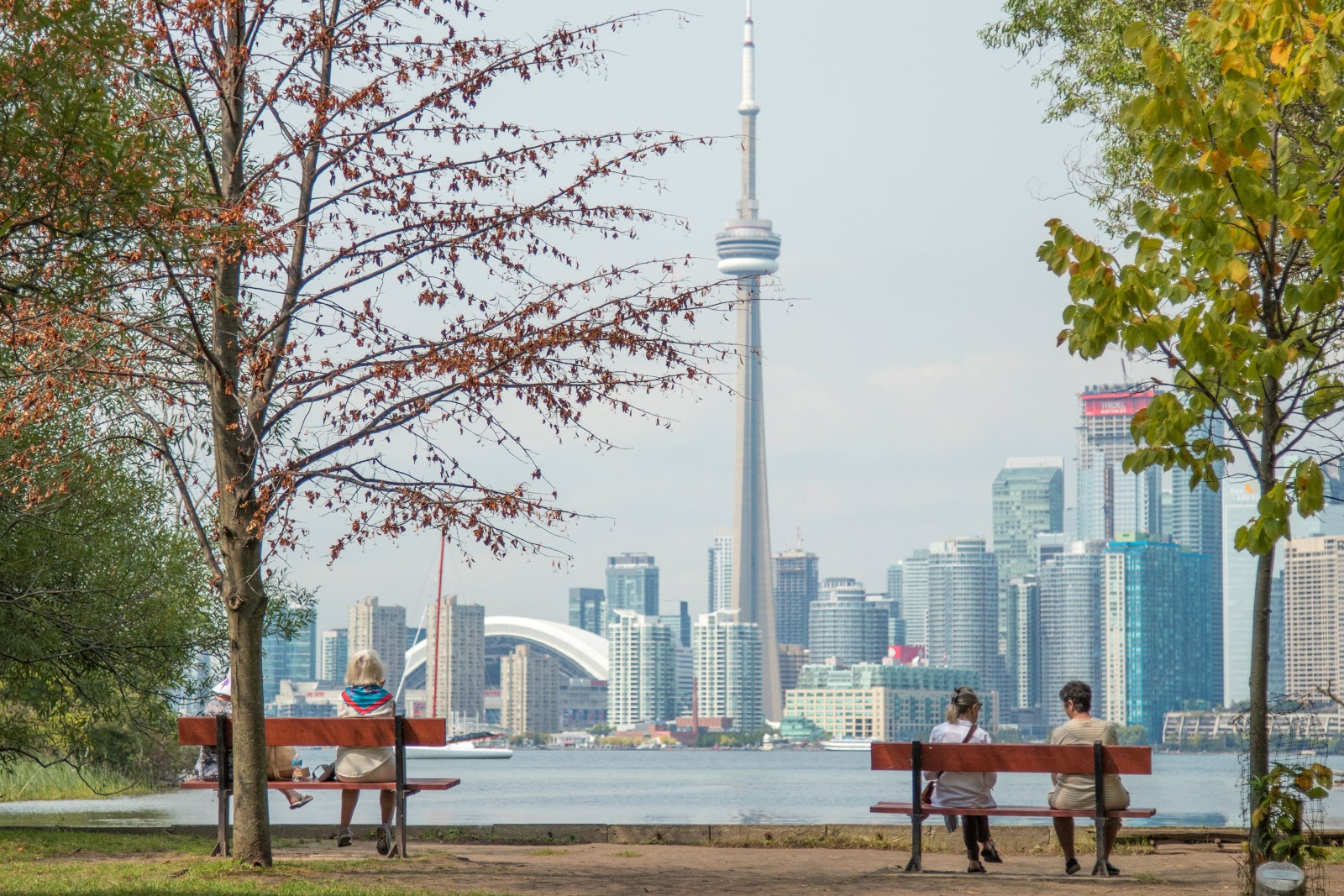 The easiest way to get that perfect shot of the Toronto skyline is to take a quick boat ride over to the Toronto Islands. Favoured by Torontonians as an escape from the city, the islands are home to an amusement park, hiking trails, as well as several yacht clubs and public beaches. Plus, you’ll get a clear shot of the CN Tower, one of the Seven Wonders of the Modern World.

Need a break from the summer heat? Spend an afternoon at the Art Gallery of Ontario, Toronto’s largest and most architecturally impressive art gallery. Designed by architect Frank Gehry, the space includes a massive spiral staircase, a glass facade, and a lookout with views of downtown and neighboring China Town. If the architecture of the building isn’t enticing enough, the gallery often welomes Instagram-friendly exhibitions such as Yayoi Kusama’s Infinity Mirrors. Pro tip: take a detour to the south exterior of the AGO and have a picnic in Grange Park. This newly-renovated greenspace is the perfect place to get a shot of OCAD’s famous “tabletop” building and the AGO’s spiral staircase. 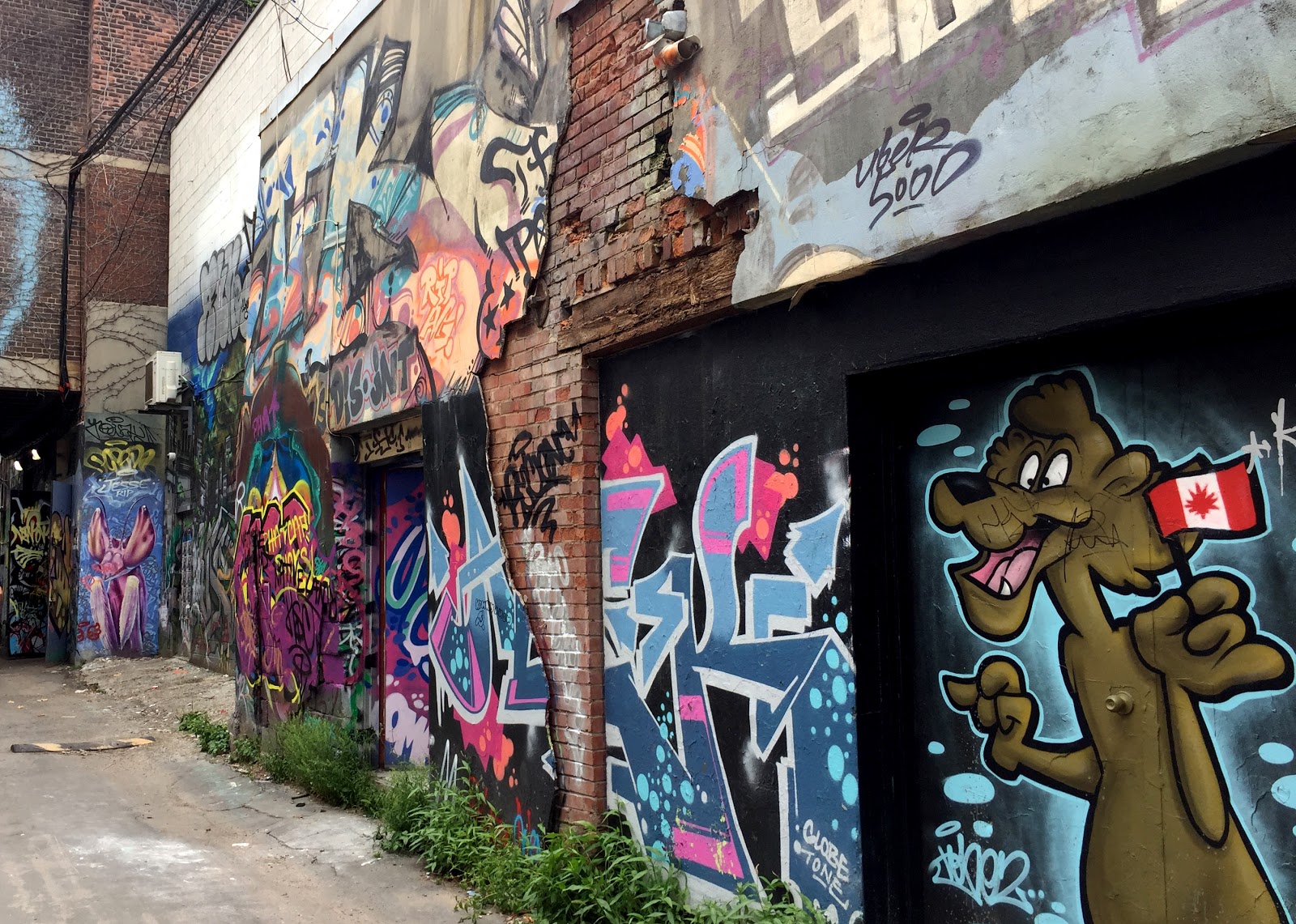 Toronto’s best street art is located within “Graffiti Alley”, a one kilometer stretch south of Queen Street West. It is one of the city’s most visually unique locations, often serving as a backdrop for photoshoots, films, and Rick Mercer’s weekly news report. Graffiti is completely legal in the alley, and new murals are added on the regular. Pro-tip: grab an ice cream cone or bubble tea on Queen Street and take some time to stroll through the art-lined streets. 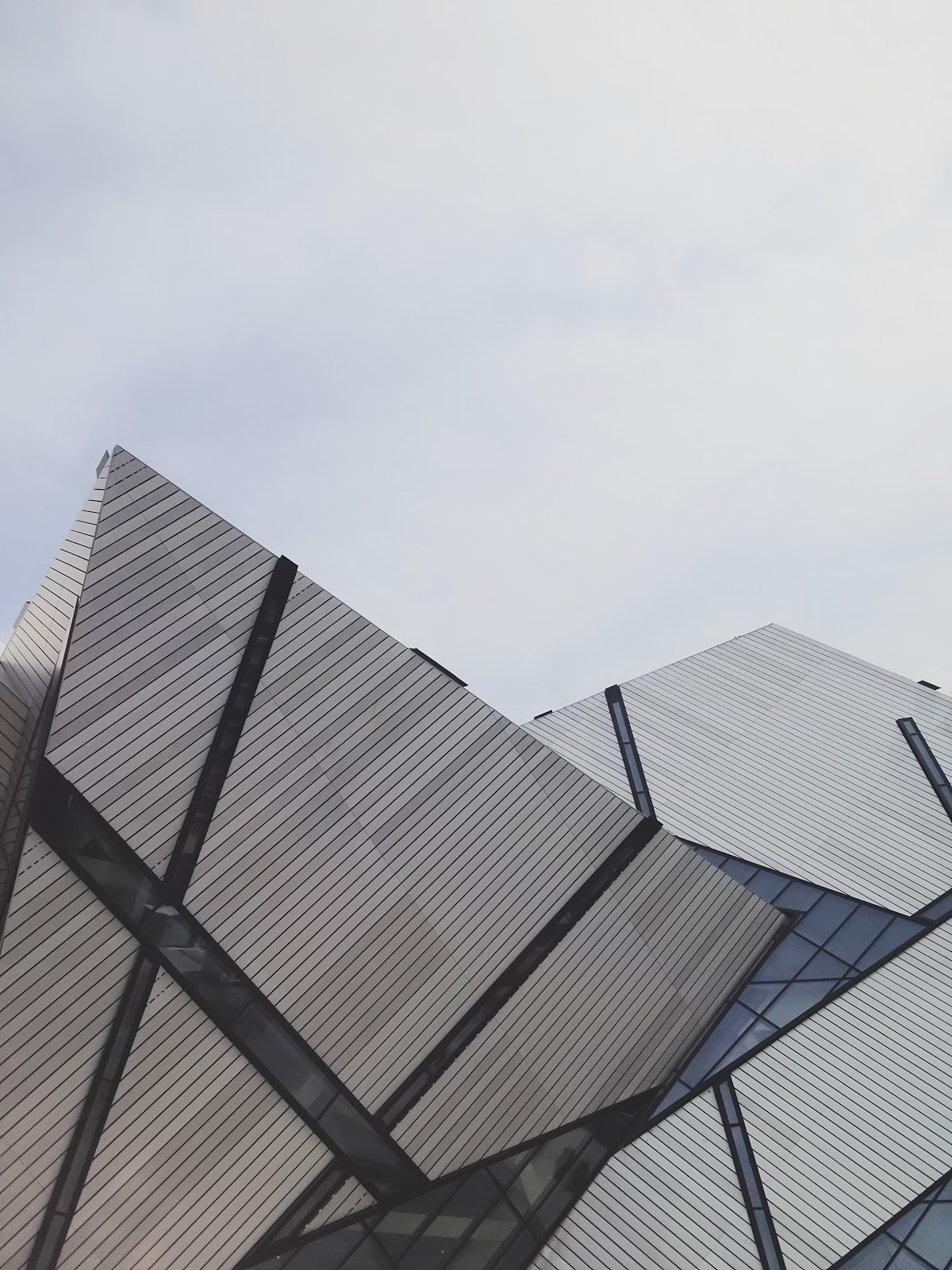 In 2007, The Royal Ontario Museum reopened its doors and unveiled a dramatic renovation. Coined as “The Crystal”, the ROM’s contemporary structure brought a sense of modernity to an otherwise historic neighborhood. Today, the ROM is home to world-class exhibitions for visitors of all ages. Pro-tip: after you have paid the ROM a visit, head around the corner to the University of Toronto’s Philosopher’s Walk. This peaceful pedestrian-only pathway runs through the university campus and is surrounded by a handful of Toronto landmarks- the Royal Conservatory of Music, Trinity College, and the University of Toronto Faculty of Law.

9. Casa Loma
You didn’t expect there to be a castle in the middle of Toronto, did you? Casa Loma is an old-time tourist favourite and a must-see for those visiting Toronto. Situated on five acres of land, the castle is surrounded by scenic grounds and gardens for visitors to explore at their leisure. Pro-tip: visit during the Halloween or Christmas holidays to see Casa Loma decked in festive furnishings and decorations.